The focus for Sequence release v0.18.0 has been on performance. This post explains the changes we've made, how they've improved performance, and why we decided to implement them. This is aimed at both SCL users and C# developers who are interested in performance.

Sequence Configuration Language (SCL) is a programming language for forensic and ediscovery technicians. The typical use case involves reading, writing, and manipulating large amounts of data so performance is critical. The language is implemented in C# so performance improvements are achieved by optimizing C# code.

Before we improve performance we need to measure it. This means benchmarking. I created a new console project and added the excellent benchmark dot net package to it.

As we want to optimize real world performance I found some real world data to run the benchmarks on. This data is a 1MB concordance file (very similar to a CSV) with 1000 rows and 44 columns. The data comes from the ENRON dataset but nevertheless I was very careful to add it to .gitignore and not commit it to the open source repository.

I wrote several SCL scripts representing different workflows. For example this script removes a column from the data:

Note that StringLength at the end. This is to ensure that the stream of concordance data is read to the end (and therefore all of the data is converted to concordance). In a real world scenario one would probably write the data to a file or send it across the internet but doing that would make the benchmarks a lot more fiddly and the code that writes to a file is outside my control anyway so there is not much point in benchmarking it.

Here is a summary of all the benchmarks and the initial results, running on a 12th gen Intel i7 CPU on Windows.

Note that all times are in microseconds, so the longest sequences are taking about one third of a second.

SCL steps all have a Run method which returns the result wrapped in a Task. One of the performance optimizations I was eager to try was wrapping the result in a ValueTask instead. This should reduce the number of heap allocations per step by one and I was expecting a small performance improvement for sequences which run cheap steps inside a loop.

The tradeoff is that there are some things you can do with a Task but not with a ValueTask such as awaiting them multiple times. Fortunately the Run method was only being used in a few places and I was able to easily check that none of the missing functionality was being used.

The results of this update:

A 2% performance improvement on the slowest benchmark was nice but I was actually hoping for a larger improvement. The StringReplace sequence was taking about three times as long as the ConvertDates sequence despite doing what seemed like a lot less work.

I thought that the reason might be that StringReplace converts the data at the end into JSON rather that concordance like most of the other benchmarks. I chose to do this initially because I wanted to make sure that performing an action on the data first didn't make the conversion to JSON slower. At this stage I wrote additional benchmarks to check if that was what was happening. It wasn't - converting to JSON was consistently ~6000μs faster than converting to concordance across the board.

Thinking again, I thought the difference might be down to the fixed cost of running a step. ConvertDates uses the Transform step which applies a JSON schema to every step in an entity stream whereas StringReplace is using the ArrayMap step to call the StringReplace step on every entity in the stream. This means that the StringReplace sequence is running about 1000 very cheap steps where ConvertDates is calling one very expensive step.

I decided to use the Visual Studio performance profiler to try and find out what was going on. I stared by using the CPU usage tool as I thought the CPU was the most likely performance bottleneck.

I discovered that a lot of time was being spent in the IRunnableStep<T>.Run method. This is not unexpected but what was unexpected was that it was spending almost three times as long in there as in the CompoundStep<T>.Run method despite it having been designed as a thin wrapper around that method which exists purely to enable logging.

Looking at the method code I immediately spotted the problem:

The EnterStep arguments are being created - using an expensive dictionary - every time the step is run, regardless of the logging level (they should only be logged if the log level is Trace and the benchmarks are using Info). Clearly what happened was that the LogSituation.EnterStep.Log method once took a Func<object[]> but was refactored to use an object[] at some point and I missed the performance implications when updating this invocation.

I fixed the code and also checked other invocations of the method to make sure I wasn't making the same mistake somewhere else (I wasn't). Then I ran the benchmarks again:

The three benchmarks which run steps in a loop all got a lot faster, and the BasicSCL sequence got almost twice as fast. This just goes to show that finding and fixing performance bugs is often massively more effective than micro-optimizing heap allocations.

The other way to get big performance wins is to use the right collections in the right places. SCL has the type entity which is used to represent data. It's a key-value or property-value container, similar to a javascript object. The most obvious way to represent this in C# was to use a Dictionary<String, Object> and that was essentially how the Entity type was implemented - though using the SCL-friendly types StringStream and ISCLObject instead. I wanted to try a different implementation using two ImmutableArrays instead. ImmutableArray is an extremely thin wrapper around an array and has exactly the same performance characteristics.

I refactored the entity type to use an ImmutableArray<StringStream> for the property names and ImmutableArray<ISCLObject> for the values. I made them private to ensure that they would always be kept in sync. I updated the implementations of all the entity methods but not the signatures. Keeping the interface the same meant that the refactor was very smooth and I hardly had to change any code outside the entity class.

Making this change also allowed me to sneak in a few other performance optimizations. When creating entities from a consistent data structure (such as a CSV file or a SQL table) I could let all the entities share the same headers collection. Note that this would have been a bad idea if I had used a regular rather than immutable array.

I ran the benchmarks again and compared to the previous results:

This change almost ❗ doubled ❗ performance across the board (note that the BasicSCL sequence does not use entities). I was very happy.

The table and charts below show the complete journey. Some of the steps were now several times as fast and this difference would likely be magnified in real world scenarios that perform multiple transformations since the costs of reading the file and converting between data formats are fixed. 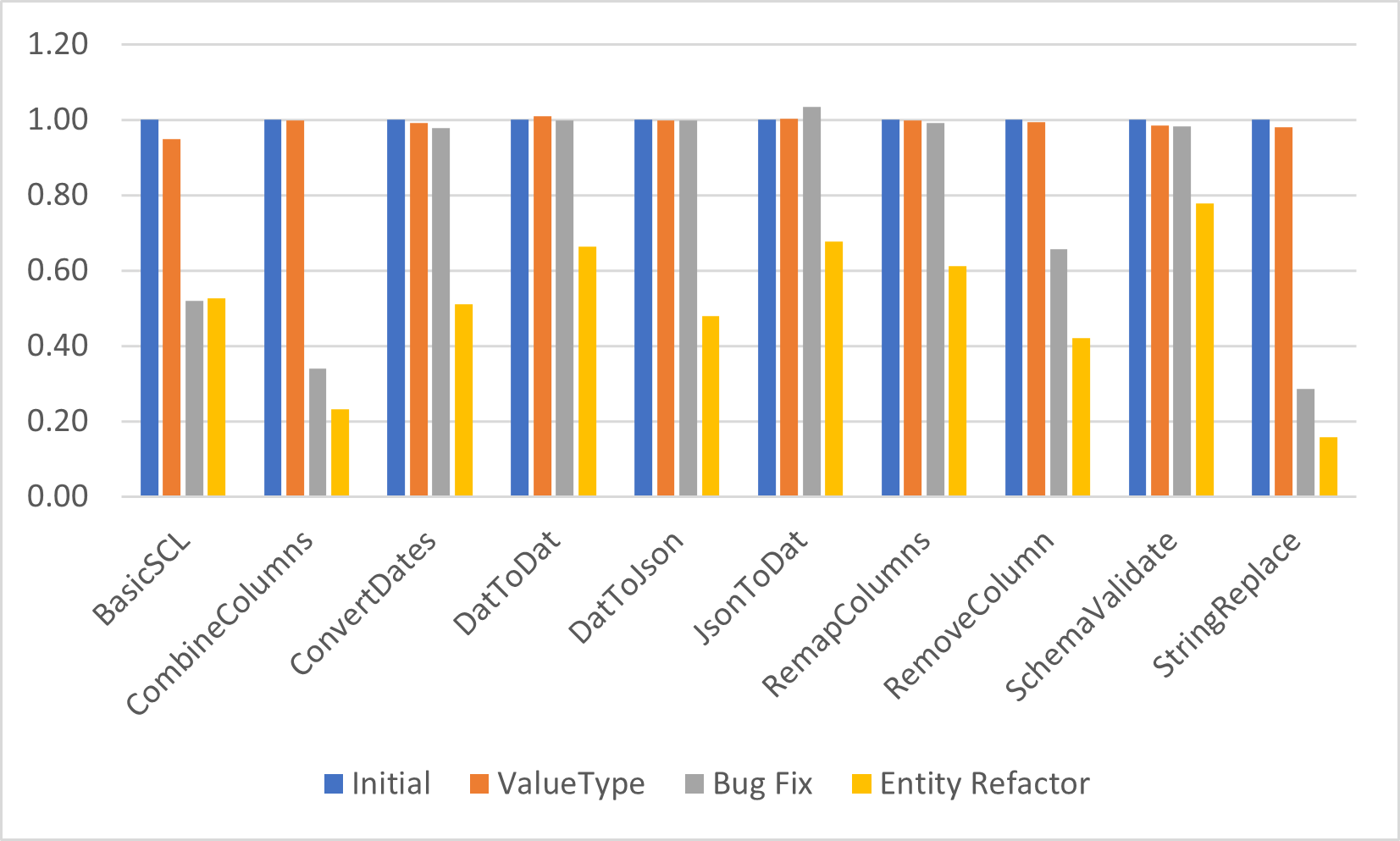 The top takeaways from this project are: